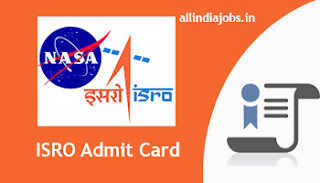 Candidates who are going to appear for the ISRO Scientist Engineer Exam can check the details about the ISRO Admit Card 2017 from this page. Candidates Who had applied for the ISRO Recruitment 2017 can download the ISRO Scientist Engineer Admit Card 2017 from the official’s website. Officials of the Indian Space Research Organization will release the Hall Ticket on the official website www.isro.gov.in 15 to 20 days prior to the exam. Then the candidates can get their ISRO Hall Ticket by providing some of the details like Registration Number and Password.

In the following section of this page, we have given a direct link to download the ISRO Admit Card 2017. The link will be activated when the officials release the admit card on its official portal. With the help of the admit card, the aspirants can know some information about the exam like venue, date etc. To select the candidates for the Scientist and Engineer positions the authorities are going to conduct the exam on 24th December 2017 at twelve various locations. The location details will available later in this article.

Indian Space Research Organization have to hire the contenders who are talented and skilled enough. So for that purpose, the ISRO Officials had released the recruitment notification for 80 vacancies in the organization for the Scientist/ Engineer Vacancies. Already the application process was started from 15th September 2017. Candidates are showing interest to shine their career ISRO. Still, aspirants had time to apply for the ISRO Job Openings. As the last date is 5th October 2017 so contenders have to submit their application forms in online mode by or before the due date. For more information about the recruitment, the candidates can go through the official notification. As the application process completed the aspirants have to start the preparation for the exam.
Examination date was announced by the officials of the ISRO that is 24th December 2017. So candidates have to plan their preparation time in an effective manner. After closing the application process the aspirants can check the ISRO Application Status whether the candidate’s application was accepted or not. In between the applied aspirants have to check the for the ISRO Admit Card 2017 to attend the Exam. On the admit card the individuals can find the particulars like Name of the contender, Registration and Roll Number, Dates of the Exam, Center of the Exam, Examination timings, Fathers Name, Mothers Name, Type of the exam, Uploaded photo and signature of the candidate. We are intimating the candidates that ISRO Admit Card 2017 is a compulsory document. Any candidate will not be allowed to sit in the examination hall to give the exam.

Important Documents To Carry For The Exam Hall

Candidates have to carry an ID Proof issued by the government along with the ISRO Admit Card. The id proof may be any one of the following,

Basically, the aspirants while preparing for the exam have to go through the exam pattern to prepare well for the exam. By keeping that in mind we are providing the ISRO Scientist Engineer Exam Pattern on this page. The Written Exam consists of 80 Objective Questions. Each question carries equal marks in the paper.

Candidates will be selected by conducting the Written Test and Personal Interview. Based on the performance in the written Test candidates will be shortlisted for the Interview Process. Written Test is only a first level screening and this score will not be considered for the final selection process. By verifying the performance in the interview the contenders will be selected. Those who secure 60% marks in the interview will be eligible for the consideration for the Empanelment in the selection panel.