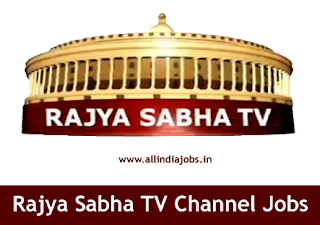 Aspirants who are interested in working with the Rajya Sabha TV can grab this chance of job openings for various position in the Rajya Sabha TV Channel. Our advice to the aspirants is to apply for the Rajya Sabha TV as early as possible before the application closed. We have gathered the details from various sources and furnished on this page in a detailed manner. So aspirants can have an eye on this page before going to apply. For more other information visit our website All India Jobs frequently.

Rajya Sabha TV (RSTV) is an Indian cable television network channel owned and operated by Rajya Sabha that covers the proceedings of Rajya Sabha (the Upper House of the Parliament of India). Apart from telecasting live coverage of Rajya Sabha proceedings, RSTV also brings incisive analysis of parliamentary affairs. While focusing on current national and international affairs, it provides a platform for knowledge-based programmes for the discerning viewer. The channel offers special attention to legislative business undertaken by the Parliament. With a vision to document the story of how the Constitution of India was created, Rajya Sabha TV produced the 10-part TV mini-series Samvidhaan, which was directed by the noted film director Shyam Benegal.

All the applied aspirants have to undergo the selection process which will be conducted by the officials of the Rajya Sabha TV. Selection Process is not same for all the positions. So we are not specifying a particular

Salary will be allotted for the candidate according to their performance in the job. At first, the salary for the aspirant will be decided by the officials by verifying the skills at the time of the interview.

How To Apply For Rajya Sabha TV Jobs

Interested candidates can use the following link to apply for the jobs in the Rajya Sabha TV. Or contenders can directly attend for the interview at the above specified location along with the documents required.
Apply Here