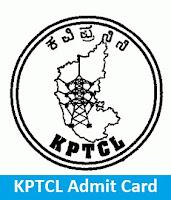 
KPTCL Recruitment Notification is released with 1921 vacancies for the post of Assistant Engineer, Junior Engineer, and other Jobs. All the applicants were currently busy with the preparation schedule as they were about to a part in the selection process. A huge number of applicants had applied for the post which makes the candidates face tough competition in the Aptitude test. The present article deals with KPTCL Admit Card which makes the downloading process simpler. Intender can also get the more information related to Karnataka Power Transmission Corporation Limited from its official site www.kptcl.com. In the below candidates can also find the information related to the selection process, Steps to download the KPTCL Admit Card directly and a link to download the KPTCL Admit Card.

To help the candidates about to give the KPTCL Examination must have to be aware with some of the dates which are helpful for the candidates at the time of preparation. The Dates included in the KPTCL important dates were a start and end date, Admit card release date, exam date, result date of the examination are provided in the below. All the dates will be updated on the basis of official notification. We suggest the aspirants make a consistent check in order to be aware of the more related information.

The Karnataka Power Transmission Corporation Limited will follow a sequence of selection procedure in order to recruit capable candidates for the available post. As a part of the selection, process aspirants have to give a written test which is an aptitude based test. Those who perform well in the Written test will be called upon for Personal Interview followed by document verification.

Important Documents to Carry for KPTCL

Aspirants before giving the examination must have to be aware of the list of document specification set up by Karnataka Power Transmission Corporation Limited while entering into the exam hall. The candidates have to make sure they were carrying any one of the specified document before entering the exam hall.

The authorities of Karnataka Power Transmission Corporation Limited will organize an Online Aptitude Examination across 07 cities in the Karnataka state. All the list of centers will be provided in the below in order to give applicants an idea of Exam Center. Concern exam center will be mentioned on the respective KPTCL admit cars

The Karnataka Power Transmission Corporation Limited must have to get aware with the list of documents specified in the Admit Card we have provided the below list. All the details are related to the applicants personal information and be sure check all the information were printed correctly or not.