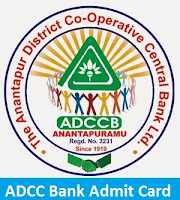 ADCC Bank Recruitment Notification makes clear that 459 vacancies were available for the post of Junior Officer, Clerical, First Class Officer, and Second Class Officer. Interested participants had applied before the due date 30th June 2017. Many candidates have applied by checking the eligible specification and has chosen the desired job. All the applicants were currently involved in the selection process and have to give a written test. This page helps the aspirants with all the details related to ADCC Bank Admit Card. Aspirants who want to get more information related to Ahmednagar District Central Co–Operative Bank can get it from the official site www.adccbanknagar.org. In the below we had given the information about the selection process, Steps to check ADCC Bank Admit Card from the official site.
Also Check: Gujarat Government Jobs

Aspirants are searching for the various website for the information about the admit card. To reduce the search burden we are providing the complete information about the  ADCC Bank Admit Card 2017. To help the applicants with the ADCC Bank exam preparation we have also provided ADCC Bank Previous Papers, Exam Pattern, and Syllabus.  In the article below a direct link to get ADCC Bank Bhopal Admit card will be provided. which can be downloaded by simply giving a click over it. Bookmark our page as to get aware of all the information related to ADCC Bank Admit card and to be aware of the official announcement. Applicants were provided with necessary suggestions and tips through which candidates can download the ADCC Bank Hall Ticket easily from Official site.

The applicants preparing with ADCC Bank Examination must have to be aware of all the schedule filed by Ahmednagar District Central Co–Operative Bank. In the process to make all the candidates clear with the ADCC Bank plan we have collected and arranged the dates in the below. ADCC Bank important dates comprise start and end date, Admit card release date, exam date, result date of the examination are provided in the below.

To help the candidates with the exam preparation we have provided the ADCC Bank Exam Pattern in order to give candidates an idea over the examination. From the exam pattern, candidates can find the details like type of the exam, subjects asking for the exam, weight age of each and every subject and section. The below exam pattern will be updated on the basis of official notification. Make sure the below provided pattern is for reference purpose only.

Ahmednagar District Central Co–Operative Bank will organize a  Written Test followed by Personal Interview. All the applicants have to get qualified in a Written Test which is mandatory. The Selection of the Applicants will be Purely on the basis of candidates Performance in the selection rounds. Prior to the Written Test Applicants have to download ADCC Bank Admit card which has to be carried. The Admit Card which will be made available 10 to 15 Days prior to the Test.

Aspirants about to give the examination must have to be aware with document specification which too is carried along with ADCC Bank Hall Ticket.

The aspirants who are seeking to download the ADCC Bank Admit Card from the official site were given necessary guidance to make the download process simple. Candidates were provided with simple steps following which they can easily get ADCC Bank Hall Ticket. Hope the information was useful and comment below for further suggestions.
Download ADCC Bank Admit Card 2017: Click Here