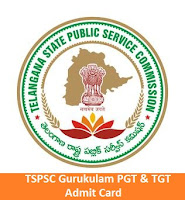 The TSPSC Gurukulam PGT TGT Admit Card 2017 will be available from 26th August 2017 on its official website. Many of the candidates who had applied for the Telangana Public Service Commission Gurukulam vacancies are preparing for the exam. Here in this article, we are providing the complete details about TSPSC Gurukulam PGT TGT Hall Ticket in this article in a detailed manner. So our advice to the aspirants is to read this article completely with focus and finally can come to an idea about the details like examination dates and availability of admit card etc. The officials of the organization are planning to conduct the TSPSC Gurukulam Art Teacher, Craft Teacher, Music Teacher, Librarian, Staff Nurse, and PET Exam from 31st August 2017 to 30th September 2017. So for the exam candidates need to carry the hall ticket issued by the officials.

You Can Also Check:  Government Jobs in Telengana & TSPSC Jobs

Telangana State Public Service Commission had released the recruitment notification for various vacancies in the organization. Through this recruitment, the officials have decided to recruit the candidates for Teacher and Lecturer positions for about 2023 vacancies. In Telangana PSC there are vacancies for Art Teacher, Craft Teacher, Music Teacher, Librarian, Staff Nurse, and PET and Preliminary Examination for the posts in Degree Colleges (DL, PD and Librarian), Junior Colleges (JL, Principal, PD and Librarian) and Mains Examination for Physical Science, Social and Science). As the organization officials had decided to conduct the exam in the May 2017. Due to some reasons they have rescheduled the dates of the exam from 31st August 2017 to 30th September 2017. So for the sake of the candidates we have provided the exam dates and availability of hall ticket in a tabular format in the consecutive section of this page. So to come to an idea contenders can refer the date given below.

The TSPSC Gurukulam PGT & TGT Admit Card was released by Telangana Public Service Commission at its Official site on 20th may 2017. In the Official site, the aspirants have to pass over a sequence of steps. To make download process simpler candidates were given a link in the below. Hall Ticket is very important for the candidates giving the examination. The Hall Ticket is very important as candidates will not be permitted to take the exam without it. Make sure that printed copy was clear and all the printed information was correct. If in any case, candidates photo was not clear he needs to carry a couple of passport size photographs. Generally, TSPSC Gurukulam PGT & TGT Admit Card is provided 10-15 days prior to the examination date.

The candidates selection will be done based on the performance in the Written Test. And Later who cleared will be called for the Certificate Verification process.

Once after done with download process check all the details printed on it. Gurukulam PGT & TGT Admit Card will contain details like Name of the Candidate, Exam Center name with code, Date and Time of Exam and guidelines to be followed at the time of examination.