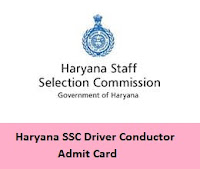 
The Haryana Staff Selection Commission had released the recruitment notification for the Heavy Vehicle Driver & Conductor Posts in the month of May 2017. The interested aspirants had applied for the vacancies before 24th June 2017. For the aspirants who had applied for the Conductor positions for those aspirants, the organization officials are going to conduct the exam on 10th September and 17th September 2017. The Heavy Vehicle Driver Exam dates are not announced till now. When the officials released the dates of the exam we will intimate the candidates through this source. As the Examination dates are announced so the aspirants have to make their preparation faster to cover all the topics by going through the Syllabus given on our website.

Haryana SSC Driver Conductor Admit Card 2017 contains Photo of the Applicant and along with that it also contains basic information of applicants such as Applicants Name, Centre of Exam, Date of Birth, Date of Test, Time of Exam etc., Aspirants are also requested to carry a proof of Identity with them to avoid further complications. Candidates can download Haryana SSC Driver Conductor Hall Ticket by entering the required details like Registration Number or Roll Number. Candidates can also check other Admit Cards details from this article. The candidate has to submit the admit card to the invigilator for the verification purpose along with the Id Proof original and Xerox. This submission is to note down the attendance and whether the candidate belongs to this state or not.

Previous Papers will also help the candidate in their preparation so candidates can easily download the Haryana SSC Conductor Model Question Papers from our website.

From the Exam Pattern, the candidates can know the details like subjects names of the exam, Questions form each subject and the weight age of marks allotted for a particular subject, a total number of questions obtain in paper and marks if the exam. By going through the exam pattern the candidates can plan their preparation time for the HSSC Conductor Exam.

The selection process consists of various rounds like Written Test, Skill Test, and Personal Interview. The candidates who cleared the written exam are able to give the skill test and those who get qualified will be called for the Personal Interview round.

Hope the data about the Haryana SSC Driver Conductor Admit Card 2017 will be useful for the candidates who are going to appear for the HSSC Conductor Exam on 10th September and 17th September 2017. The Heavy Vehicle Driver Exam dates are not announced till now. We will update this page when the officials released. Keep visiting our website All India Jobs regularly for the latest updates. Or candidates can book mark this page by clicking on “Ctrl+D”.