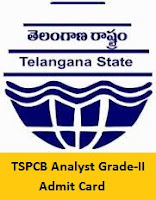 Telangana Pollution Control Board also called as TSPCB is a Government organization in India. Every year lot of candidates are appointing for the various posts by this organization. On that basis, the TSPCB is going to organize the written exam on Analyst Grade-II & other vacancies. The Telangana Pollution Control Board has recently released notification for rejected candidates list for TSPCB Exam.

Aspirants who had registered for the Analyst Grade-II & other Exam can download the Admit card when TSPCB announce the dates to download the hall ticket. Interested Contenders can also see TSPCB Recruitment 2017. TSPCB Analyst Grade-II & other Exam Admit card will be provided very soon through online mode, and all the applicants should visit the official page regularly for more information regarding admit card, examination date.

Check the below provided details for more information about the TSPCB Analyst Grade-II & other vacancies. Candidates, please keep poise regarding admit card because admit card can be downloaded only when the board is declared. We suggest the applicants check our website frequently for more updates on admit cards. After completing the registration process the applicants are now eagerly checking for the exam dates and admit card of the applied exam. The TSPCB has released the hall ticket prior.

So applicants can download the admit card by entering the required details asked in the form from the official website or from our website All India Jobs. The candidates who are going to attend for the TSPCB Analyst Grade-II & other Exam have to compulsorily carry the TSPCB Hall Ticket and an id proof issued by the govt along with them. Without these, the candidate will not be allowed to perform the exam.

The Telangana State Pollution Control Board (TSPCB) is a statutory authority entrusted to implement environmental laws and rules within the jurisdiction of the State of Telangana, India. The Board ensures proper implementation of the statutes, judicial and legislative pronouncements related to environmental protection within the State. As per A.P. Re-organization Act, 2014, APPCB was bifurcated and TSPCB was constituted under Sec.4 of Water (Prevention & Control of Pollution) Act,1974 and Section 5 of Air (Prevention & Control of Pollution) Act,1981, on 07-07-2014.

Steps How To Download TSPCB Analyst Grade-II & other Admit Card

Applicants who are going to appear in TSPCB Analyst Grade-II & other exam can download admit card in it below instructed manner.