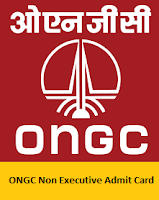 Oil and Natural Gas Corporation Limited also called as ONGC is a Government organization in India. Every year lot of candidates are appointing for the various posts by this organization. On that basis, the ONGC is going to organize the written exam on Non-Executive Posts Vacancies. Aspirants who had registered for the Non Executive Posts Exam can download the ONGC Non Executive Admit Card 2017 from the official website. As per the latest news, the officials of the organization had released the admit card on 20th September 2017.

ONGC Non Executive Admit Card 2017 is available now in online mode, and all the applicants should visit the official page regularly for more information regarding admit card, examination date. Check the below provided details for more information about the ONGC Non Executive Posts vacancy. Candidates, please keep poise regarding admit card because admit card can be downloaded only when the board is declared. We suggest the applicants check our website frequently for more updates on admit cards. Interested applicants can see Previous Papers on our website.

Oil and Natural Gas Corporation Limited (ONGC) is an Indian multinational oil and gas company headquartered in Dehradun, Uttarakhand, India. It is a Public Sector Undertaking (PSU) of the Government of India, under the administrative control of the Ministry of Petroleum and Natural Gas. It is India’s largest oil and gas exploration and production company. It produces around 77% of India’s crude oil (equivalent to around 30% of the country’s total demand) and around 62% of its natural gas.

On 31 March 2013, its market capitalization was INR 2.6 trillion (US$48.98 billion), making it India’s second largest publicly traded company. In a government survey for the fiscal year 2011–12, it was ranked as the largest profit making PSU in India. ONGC has been ranked 449th in the Fortune Global 500 list of the world’s biggest corporations for the year 2015. It is ranked 17th among the Top 250 Global Energy Companies by Platts.

The written Exam comprises questions from as like follows,

Applicants who are going to appear in ONGC Non Executive Posts exam can download admit card in it below instructed manner.

Here we provided the sufficient information for the candidates to download the hall ticket of ONGC Non Executive Posts. We will provide all the latest updates regarding ONGC Non Executive Admit Card 2017. Keep on checking our website www.allindiajobs.in for further information and can also Bookmark this page.