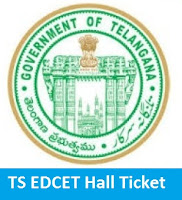 TS EDCET Hall Ticket 2017 is out for download. Candidates who had applied for TS EDCET Admit card can now easily download the Admit card without getting confused by following the steps which are mentioned below. We also suggest candidates download the TS EDCET Admit Card 2017 at least 5-10 former days from the Date of Examination. Because having admit card is very important to attend the examination.


Candidates will not be allowed into Examination Hall if the person is not carrying Admit Card along with them. Candidates can also check our site All India Jobs for other Exam Admit Cards 2017. Interested applicants can see Previous Papers on this page. TS EDCET Hall Ticket contains Photo of the Applicant and along with that it also contains basic information of Contenders such as candidates Name, Father Name, Mother Name, Date of Birth, Examination Name, Centre of Exam, Date of Test, Time of Exam etc..,

Applicants are also requested to carry a proof of Identity with them to avoid further complications. Candidates can download admit Card only by entering their date of Birth and Application number on the official website ie.., www.tsedcet.org. We also provide Latest Syllabus in this post.

Osmania University established in 1918, is the seventh oldest in the Country, third oldest in South India and the First in the princely state of Hyderabad. The establishment of Osmania University symbolizes a renaissance in the Indian Educational System and has shown a remarkable resilience throughout its existence. The university is instrumental in the propagation of Higher Education to cater the needs of the community in the region over nine decades and has grown into one of the major Universities of India. It has a vast sprawling green campus of 500 hectares set in picturesque and idyllic surroundings. It owns a number of buildings of great architectural elegance and variety to enhance the beauty of the campus. The university is an autonomous institution created through an act of the legislature and most part of the funding is from the State Government. The university holds the flagship for Higher Education of Government of Telangana and has played a key role in planning, initiating and implementation of various development programs.

The following information is printed in candidates admission ticket:

Candidates need to carry admit card along with one of the following original document: