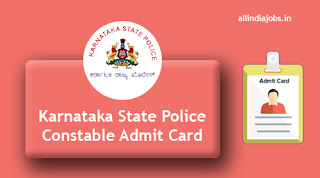 Good news for the candidates who are looking for the police jobs. The Karnataka State Police Department had disclosed the recruitment notification for 1244 vacancies. Through this recruitment, the officials are planning to recruit the aspirants for the Police Constable, Special Reservice Constable Vacancies. As the closing date to submit the applications in the online mode is 18th December 2017. To avoid last minute rush the candidates have to hurry up to apply by or before the due date. After completing the registration process the applicants are now eagerly checking for the exam dates and admit card of the applied exam. The Karnataka State Police will release the hall ticket prior to the examination Date.

Candidates need to carry admit card with the latest photograph attached to it along with one of the following original documents with one photocopy.

Applicants who are going to appear in Karnataka State Police Constable exam can download admit card in the below instructed manner.