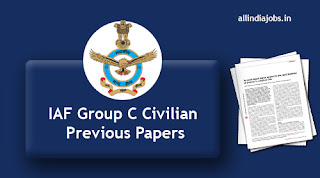 IAF Group C Civilian Previous Papers PDF are given here along with the exam pattern. Download Indian Air Force solved papers and commence their preparation. All the aspirants who had applied for the IAF Group C Civilian Recruitment 2017 for the Mess Staff,  Safaiwala, MTS, StoreKeeper, LDC, Cook, Carpenter, Dhobi, Ward Sahayika / Ayah, Painter, Valcanizer Vacancies can get the previous papers from this source. Also, get Indian Air Force Group C Civilian Previous Year Question Papers along with solutions from the below sections. Applicants who wish for these jobs can practice these papers before attending the exam. So candidates can get a high score on the main examination and then grab the job in the Interview process. The previous exam solved papers of Indian Air Force are useful for the aspirants to enhance their career in this field. So kindly visit our website www.allindiajobs.in for further updates.

Newly the Indian Air Force had released the employment notification to fill the vacant positions in the organization. There are 132 vacancies for the Mess Staff,  Safaiwala, MTS, StoreKeeper, LDC, Cook, Carpenter, Dhobi, Ward Sahayika / Ayah, Painter, Valcanizer positions. The interested aspirants whose dream to crack the job in the Indian Air Force can apply for the vacancies before the final date that is 11th December 2017 by checking the eligibility details.

Great Opportunity for the candidates who are seeking for the Central Government Jobs. After applying the applied aspirants can download the provided the IAF Group C Civilian Previous Papers for the exam preparation. Previous papers, exam pattern provided here are just for information purpose only. Sometimes companies may change their exam pattern. So please check official company website for latest information.

Here are some updated previous papers for the candidates who are going to attend for the IAF Group C Civilian Written Exam. For every government Job, there will be a tough competition and candidates can grab the job by thorough preparation. These IAF Group C Civilian Previous Papers are helpful for the applicants for the success of the examination. Candidates who had Applied for the Indian Air Force Recruitment can check the Indian Air Force Syllabus which newly updated on this page and officially confirmed. Hereby, Applicants are requested to prepare according to the Syllabus and Indian Air Force Previous Papers so that they can easily get selected during the recruitment. Generally, the Syllabus consists of General Awareness, General Knowledge, Computer Knowledge etc. Right from basics to the in-depth syllabus is given below. By these candidates can get more knowledge by knowing the syllabi of the examination. Scroll down to get more information on previous papers and syllabus. All the Best to the readers who are trying for the Indian Air Force jobs. You should check Indian Air Force Syllabus before attending the exam. So that you can prepare well for the exam.

The Indian Air Force is the air arm of the Indian armed forces. It is the world’s fourth largest air force in terms of both personnel and aircraft. Its primary responsibility is to secure Indian airspace and to conduct aerial warfare during a conflict. It was officially established on 8 October 1932 as an auxiliary air force of the British Empire and the prefix Royal was added in 1945 in recognition of its services during World War II. After India became independent from the United Kingdom in 1947, the Royal Indian Air Force served the Dominion of India, with the prefix being dropped when India became a republic in 1950. Since independence, the IAF has been involved in four wars with neighboring Pakistan and one with the People’s Republic of China. Other major operations undertaken by the IAF include Operation Vijay, Operation Meghdoot, Operation Cactus and Operation Poomalai. Apart from conflicts, the IAF has been an active participant in United Nations peacekeeping missions.

Written Test/ Skill Test/ Physical Test are the rounds of the selection process. Candidates have to cross the rounds by securing the good score to get the job for the applied position.

Applicants who are searching for the Indian Air Force previous papers can check the precise information here. To qualify for this interview, it is advisable to check the LDC, MTS, IAF Group C posts previous papers before attending the exam. By practicing these papers you can reach your destination. There are no shortcuts to success. It is the result of preparation, hard work and learning from failure. We wishing you all the very best for your success.

Hope the information about the IAF Group C Civilian Previous Papers is useful for the candidates. For more latest updates keep visiting our website www.allindiajobs.in on regular basis.