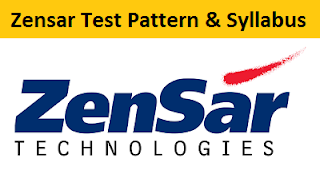 This section consists of 7 programs. There is code is given, you can modify the bugs and get the relevant output which is given in the program. You are required to select one language from C, C++, Java before starting this section.

This section consists of 4 sections each of pseudo code, C, UNIX and SQL.

Note: We have provided Zensar Test Pattern and Written Exam Syllabus based on their previous written tests. However companies may change their pattern and syllabus at any time. We will try to keep this page updated with latest test pattern of Zensar. Sometimes companies conduct written tests through third party service providers such as AMCAT and eLitmus. So in such scenarios you need to prepare based on amcat syllabus and elitmus syllabus respectively.