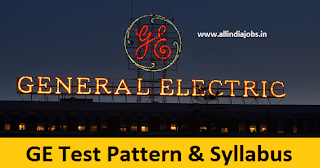 Dear readers, we have provided General Electric test pattern, syllabus, and selection process for your reference. Test pattern and syllabus are the two important things that each job aspirant should know before attending the interview of any company. If know the written test pattern and syllabus, you can easily crack the online test or written test with ease. One more important thing is, knowing GE Syllabus and the test pattern is not enough 🙂 You should practice and prepare well to crack any interview.

All the best for your GE job interview. Keep visiting All India Jobs for latest syllabus, test pattern and job updates.

You can also see: GE Placement Papers and GE Recruitment

This section consists of questions from core subjects such as C, C++, DBMS, Computer Organization and Operating System.

In 2011, GE ranked among the Fortune 500 as the 6th-largest firm in the U.S. by gross revenue, and the 14th most profitable. As of 2012, the company was listed the fourth-largest in the world among the Forbes Global 2000, further metrics being taken into account. The Nobel Prize has twice been awarded to employees of General Electric: Irving Langmuir in 1932 and Ivar Giaever in 1973.

Note: We have provided General Electric Test Pattern and Written Exam Syllabus based on their previous written tests. However companies may change their pattern and syllabus at any time. We will try to keep this page updated with latest test pattern of General Electric. Sometimes companies conduct written tests through third party service providers such as AMCAT and eLitmus. So in such scenarios you need to prepare based on amcat syllabus and elitmus syllabus respectively.