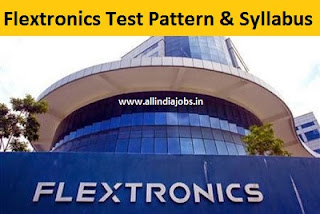 Dear readers, we have provided Flextronics test pattern, syllabus, and selection process for your reference. Test pattern and syllabus are the two important things that each job aspirant should know before attending the interview of any company. If know the written test pattern and syllabus, you can easily crack the online test or written test with ease. One more important thing is, knowing Flextronics Syllabus and the test pattern is not enough 🙂 You should practice and prepare well to crack any interview.

All the best for your Flextronics job interview. Keep visiting All India Jobs for latest syllabus, test pattern and job updates.

This section consists of questions from topics such as seating arrangement,word rearrangement , Age problems and Puzzles.

This section consists of questions from topic such as Antonyms, Synonyms, Fill in the blanks and Reading Comprehensions.

In 1990, the company returned to being a private company in a leveraged buyout and was renamed as Flextronics International, Ltd. with Singapore as its new base. In 1993, the company received venture capital funding through Sequoia Capital,and became a public held company again in 1994. The company closed its contract electronic manufacturing plant in Richardson, Texas in 1996. The company acquired two companies in Hong Kong, Astron Group and FICO Plastics Ltd. and a Swedish-based company, Ericsson Business Networks. In 2000, the company ranked third on “100 Best-Managed Companies” by IndustryWeek. In 2005, the company purchased the manufacturing division of Nortel Networks, and Solectron in 2007. In 2006 Flextronics took over a part of the production of Lego, but in 2009 Lego decided to end relations with Flextronics and purchase the production facilities in Mexico and Hungary. On June 4, 2007, Flextronics offered to purchase Solectron for US$3.6 billion and thus making Solectron a subsidiary of Flextronics. The acquisition of Solectron was completed by end of October 2007, earlier than anticipated.

Note: We have provided Flextronics Test Pattern and Written Exam Syllabus based on their previous written tests. However companies may change their pattern and syllabus at any time. We will try to keep this page updated with latest test pattern of Flextronics. Sometimes companies conduct written tests through third party service providers such as AMCAT and eLitmus. So in such scenarios you need to prepare based on amcat syllabus and elitmus syllabus respectively.