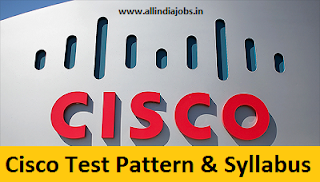 Dear readers, we have provided Cisco test pattern, syllabus, and selection process for your reference. Test pattern and syllabus are the two important things that each job aspirant should know before attending the interview of any company. If know the written test pattern and syllabus, you can easily crack the online test or written test with ease. One more important thing is, knowing Cisco Syllabus and the test pattern is not enough 🙂 You should practice and prepare well to crack any interview.

All the best for your Cisco job interview. Keep visiting All India Jobs for latest syllabus, test pattern and job updates.

This section consists of questions from C including pointers and based on Java.

Cisco Systems, Inc. is an American corporation technology company headquartered in San Jose, California, that designs, manufactures and sells networking equipment worldwide. It is the largest networking company in the world. The stock was added to the Dow Jones Industrial Average on June 8, 2009, and is also included in the S&P 500 Index, the Russell 1000 Index, NASDAQ-100 Index and the Russell 1000 Growth Stock Index.

Cisco Systems was founded in December 1984 by Leonard Bosack, who was in charge of the Stanford University computer science department’s computers, and his wife Sandy Lerner, who managed the Graduate School of Business’ computers.

Despite founding Cisco in 1984, Bosack, along with Kirk Lougheed, continued to work at Stanford on Cisco’s first product. It consisted of exact replicas of Stanford’s “Blue Box” router and a stolen copy of the University’s multiple-protocol router software. The software was originally written some years earlier at Stanford medical school by research engineer William Yeager. Bosack and Lougheed adapted it into what became the foundation for Cisco IOS. On July 11, 1986, Bosack and Lougheed were forced to resign from Stanford and the university contemplated filing criminal complaints against Cisco and its founders for the theft of its software, hardware designs and other intellectual properties. In 1987, Stanford licensed the router software and two computer boards to Cisco.

Note: We have provided Cisco Test Pattern and Written Exam Syllabus based on their previous written tests. However companies may change their pattern and syllabus at any time. We will try to keep this page updated with latest test pattern of Cisco. Sometimes companies conduct written tests through third party service providers such as AMCAT and eLitmus. So in such scenarios you need to prepare based on amcat syllabus and elitmus syllabus respectively.