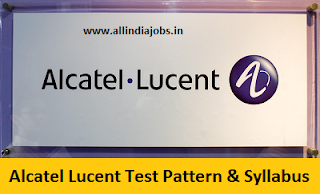 Dear readers, we have provided Alcatel-Lucent test pattern, syllabus, and selection process for your reference. Test pattern and syllabus are the two important things that each job aspirant should know before attending the interview of any company. If know the written test pattern and syllabus, you can easily crack the online test or written test with ease. One more important thing is, knowing Alcatel-Lucent Syllabus and the test pattern is not enough 🙂 You should practice and prepare well to crack any interview.

All the best for your Alcatel-Lucent job interview. Keep visiting All India Jobs for latest syllabus, test pattern and job updates.

This section consists of basic questions from English language, like synonyms,antonyms,sentence completion and correction etc.

This section consists of 2 questions from coding , wherein the student is required to code in any language of their choice

This section consists of questions from C, C++ and JAVA.

The company focused on fixed, mobile and converged networking hardware, IP technologies, software and services, with operations in more than 130 countries. It had been named Industry Group Leader for Technology Hardware & Equipment sector in the 2014 Dow Jones Sustainability Indices review and listed in the 2014 Thomson Reuters Top 100 Global Innovators for the 4th consecutive year. Alcatel-Lucent also owns Bell Laboratories, one of the largest research and development facilities in the communications industry, whose employees have been awarded eight Nobel Prizes and the company holds in excess of 29,000 patents.

Alcatel-Lucent’s chief executive officer is Michel Combes and the non-executive chairman of the board is Philippe Camus. Camus joined the company in the third quarter of 2008, alongside Ben Verwaayen as CEO, after Alcatel-Lucent’s first CEO Patricia Russo and first chairman Serge Tchuruk resigned. For 2010, the company had revenues of €16 billion and a reported net loss of €334 million. For 2011, revenues were €15 billion, net loss of €1.1 billion. For 2012, revenues were €14.4 billion and net loss of €1.4 billion. After seven consecutive years of negative cash flows, in October 2013 the company announced plans to slash 10,000 employees, or 14% of the total current 72,000 workforce, as a part of a €1 billion cost reduction effort.

Note: We have provided Alcatel-Lucent Test Pattern and Written Exam Syllabus based on their previous written tests. However companies may change their pattern and syllabus at any time. We will try to keep this page updated with latest test pattern of Alcatel-Lucent. Sometimes companies conduct written tests through third party service providers such as AMCAT and eLitmus. So in such scenarios you need to prepare based on amcat syllabus and elitmus syllabus respectively.