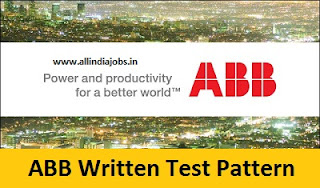 All the best for your ABB job interview. Keep visiting All India Jobs for latest syllabus, test pattern and job updates.

The recruitment process consists of 4 rounds as given below.

ABB (ASEA Brown Boveri) is a Swedish-Swiss multinational corporation headquartered in Zürich, Switzerland, operating mainly in robotics and the power and automation technology areas. It ranked 158th in the Forbes Ranking (2013).
ABB is one of the largest engineering companies as well as one of the largest conglomerates in the world. ABB has operations in around 100 countries, with approximately 135,000 employees in December 2015, and reported global revenue of $35.5 billion for 2015.
ABB is traded on the SIX Swiss Exchange in Zürich, Nasdaq Stockholm and the New York Stock Exchange in the United States.

ABB resulted from the 1988 merger of the Swedish corporation Allmänna Svenska Elektriska Aktiebolaget (ASEA) and the Swiss company Brown, Boveri & Cie (BBC); the latter had absorbed the Maschinenfabrik Oerlikon in 1967. CEO at the time of the merger was the former CEO of ASEA, Percy Barnevik, who ran the company until 1996.

ABB’s history goes back to the late 19th century. The company was incorporated by Ludwig Fredholm in 1883 and Brown, Boveri & Cie (BBC) was formed in 1891 in Baden, Switzerland, by Charles Eugene Lancelot Brown and Walter Boveri as a Swiss group of electrical companies producing AC and DC motors, generators, steam turbines and transformers.

Note: We have provided ABB Test Pattern and Written Exam Syllabus based on their previous written tests. However companies may change their pattern and syllabus at any time. We will try to keep this page updated with latest test pattern of ABB Group. Sometimes companies conduct written tests through third party service providers such as AMCAT and eLitmus. So in such scenarios you need to prepare based on amcat syllabus and elitmus syllabus respectively.