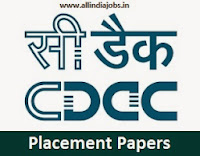 Job seekers who are preparing for written exam of CDAC can check the entire post for detailed information. In this post, we have arranged CDAC Aptitude, Reasoning and English Questions along with answers. Who had a passion to work in MNC company CDAC should practice latest CDAC placement papers which are helpful to gain the best score in CDAC Written Test. For more updated information about Placement Papers, Test Papers and Syllabus keep on visiting our site All India Jobs for the latest info.
You Can Also Check: Interview Questions

Candidates should practice the CDAC Test Pattern according to the syllabus by managing the time. This will help them to analyze in which area they are weak and have to spend more time to achieve their goal of clearing the written exam and further move to next rounds. It is not an easy matter to get placed in CDAC Recruitment. So practice hard to get selected in CDAC Company. To help the candidates we have uploaded CDAC Placement Papers in a PDF Format. Interested contenders can download it for offline preparation.

In this section, we are discussing Aptitude test papers. To help the contenders we have published CDAC aptitude questions and answers with a detailed explanation.

1. Answer the questions on the basis of the information given below. The Head of a newly formed government desires to appoint five of the six elected members A, B, C, D, E and F to portfolios of Home, Power, Defence, Telecom, and Finance. F does not want any portfolio if D gets one of the five. C wants either Home or Finance or no portfolio. B says that if D gets either Power or Telecom then she must get the other one. E insists on a portfolio if A gets one. Which is a valid assignment?
A. A-Home, B-Power, C-Defence, D-Telecom, E-Finance.
B. C-Home, D-Power, A-Defence, B-Telecom, E-Finance
C. A-Home, B-Power, E-Defence, D-Telecom, F-Finance
D. B-Home, F-Power, E-Defence, C-Telecom, A -Finance
Ans. B
Solution:
From the above information, we can infer that option (2) is correct.
2. If A gets Home and C gets Finance, then which is NOT a valid assignment for Defence and Telecom?
A. D-Defence, B-Telecom
B. F-Defence, B-Telecom.
C. B-Defence, E-Telecom
D. B-Defence, D-Telecom.
Ans. D
3. Which number comes next in this series? 0 1 3 6 10 15
A. 19
B. 21
C. 26
D. 32
Ans. B
4. Which number comes next in this series ? 1 4 7 10 13 16
A. 17
B. 19
C. 21
D. 25
Ans. B
5. A cable, 16 meters in length, hangs between two pillars that are both 15 meters high. The ends of the cable are attached to the tops of the pillars. At its lowest point, the cable hangs 7 meters above the ground. How far are the two pillars apart?
A. 8 M
B. 0 M
C. 15 M
D. 1 M
Ans. B
Solution:
Note that it is a kind of trick question: the pillars stand next to each other. Which means that the cable goes 8 meters straight down and 8 meters straight up. Conclusion: The distance between the pillars is zero meters.
6. Some of the months have 30 days, some months have 31 days. How many months have 30 days?
A. 4
B. 6
C. 11
D. None of these
Ans. C
Solution:
Expect February all other 11 months have 30 days
7. The words in the bottom row are related in the same way as the words in the top row. For each item, find the word that completes the bottom row of words. apples fruit supermarket novel book?
A. bookstore
B. magazine
C. vegetable
D. shopping
Ans. A
Solution: The relationship above the line is as follows; apples are a kind of fruit; fruit is sold in a supermarket. Below the line, the relationship is: a novel is a kind of book; books are sold in a bookstore
8. Every one of the following questions consists of a related pair of words, followed by five pairs of words. Choose the pair that best represents a similar relationship to the one expressed in the original pair of words.
PULSATE: THROB

In this session, we have provided Reasoning questions and answers which are helpful for the candidates to score good marks in CDAC Reasoning tests. Aspirants are advised to check the sample papers just for reference purpose only.
1. If – means *, * means +, + means / and / means -, then 40 * 12 + 3 – 6 / 60 = ?

3. Effect: A large number people prefer platinum ornaments to gold ornaments.
Which of the following can be a possible cause for the above effect?


5. Should the institute conduct classes in remote villages?
Arguments:
I. Yes, this will help those students who belong to villages and cannot visit urban ares for studies.
II. No, this is not an economically viable proposal, as the number of students who attend such classes cannot contribute to break-even.

Solution:
Statement I: The basic purpose of conducting classes is to help students. Hence, statement I is a strong argument as it conveys this idea.
Statement II: If the institute conducts classes with the intention of making profits, then this is a valid point to be considered. Hence, statement II is also strong.


6. Arrange the given words in alphabetical order and tick the one that comes in the middle ?

7. The cause of corruption in medical education is shortage of seats, and fewer doctors than required for the population and even fewer specialists.
Which of the following can be inferred from the above?

A. Students pay bribes to the management of institutions to avail seats.
B. The criteria to select students to fill medical seats are flexible.
C. There is a set standard regarding the doctors to population ratio.
D. Most of the doctors are general physicians.
E. None of these

Solution:
It is stated that fewer states is one of the reasons for corruption. From this we can understand that bribes are paid to get seats. But the statement does not give information as to whom the bribe is paid. Hence, (a) cannot be inferred. The reasons for people to be able to be involved in corruption is either the rules are flexible or the rules are being blatantly violated. Hence, (b) cannot be inferred. One of the reasons for corruption is fewer number of doctors than required. There is a set standard regarding the number of doctors required. Hence, (c) can be inferred. Fewer doctors are Specialists implies that rest are not specialists. This is relation of what is given in the statement. Choice (c) can be inferred.

8. If the letters in the word “IDENTITY” are arranged in alphabetical order, then how many letters do not remain in same place?

9. If the alphabets are written in reverse order after interchanging alphabets from ‘D to L’ with those from ‘R to Z’ respectively, which letter would be midway between W and E in the new order?

12. Most Reality TV centers on two common motivators: fame and money. The shows transform waitresses, hairdressers, investment bankers, counselors, and teachers, to name a few, from obscure figures to household names. A lucky few successfully parlay their fifteen minutes of fame into celebrity. The luckiest stars of Reality TV also reap huge financial rewards for acts including eating large insects, marrying someone they barely know, and revealing their innermost thoughts to millions of people. This paragraph best supports the statement that

A. the stars of Reality TV are interested in being rich and famous.
B. Reality TV is the best thing that has happened to network television in a long time.
C. for Reality TV stars, fame will last only as long as their particular television show.
D. traditional dramas and sitcoms are being replaced by Reality TV programming at an alarming rate.
E. Reality TV shows represent a new wave of sensationalistic, low quality programming.

Solution:
This is expressed in the first sentence. Choices b, d, and e are not supported by the passage. Choice c is incorrect because the paragraph states that some Reality TV stars manage to parlay their fifteen minutes of fame into celebrity.

13. Statement:
Should children be prevented completely from watching television?
Arguments:
I. No, we get vital information regarding education through television.
II. Yes, it hampers the study of children.

Solution:
Watching TV may also be a part of education. Moreover, long hours of studies without entertainment may prove to be fruitless.

14. The film director wants an actress for the lead role of Lucy who perfectly fits the description that appears in the original screenplay. He is not willing to consider actresses who do not resemble the character as she is described in the screenplay, no matter how talented they are. The screenplay describes Lucy as an average-sized, forty something redhead, with deep brown eyes, very fair skin, and a brilliant smile. The casting agent has four actresses in mind.
Actress #1 is a stunning red-haired beauty who is 5’9″ and in her mid-twenties. Her eyes are brown and she has an olive complexion.
Actress #2 has red hair, big brown eyes, and a fair complexion. She is in her mid-forties and is 5’5″.
Actress #3 is 5’4″ and of medium build. She has red hair, brown eyes, and is in her early forties.
Actress #4 is a blue-eyed redhead in her early thirties. She’s of very slight build and stands at 5′.
Which two actresses should the casting agent send to meet the director?

Solution:
Actresses #2 and #3 possess most of the required traits. They both have red hair and brown eyes, are average-sized, and are in their forties. Actress #1 is very tall and is only in her mid-twenties. She also has an olive complexion. Actress #4 is of very slight build and is in her early thirties. She also has blue eyes.

In this section, we discussed on CDAC English written test papers. Practice more model test papers and improve your vocabulary. We suggest the contenders just refer the provided sample papers for reference purpose only.

1. The teacher punished the boys who had not done their homework?

2. A person leaving his native country to settle in another.

Solution:
Erode means to gradually wear away or deteriorate, improve is its antonym.

Solution:
The reason for the fine being imposed on him was that he flouted the traffic rules, this is conveyed when the two sentences are combined using B and C as the probable starters.

Solution:
The human population is increasing or ‘burgeoning’ day-by-day, or expanding. The reference is to growth in number.

10. He has written a poem which fascinates everyone.

Solution:
Everyone is fascinated by the poem which has been written by him.

Solution:
The word ‘since’ suggests a reason. Hence, B is incorrect. The sentences present a contradiction.

13. Choose the best word in the given passage.

A. according to the Bible
B. it is meek and humble
C. who shall inherit the earth
D. no error

15. All of us have some unique skill sets and personality traits those give us high competence in some areas.

The ‘skill sets’ and ‘personality traits’ referred to in the sentence are indicated using the relative pronoun ‘that’. The correction is ‘that give us high competence’.