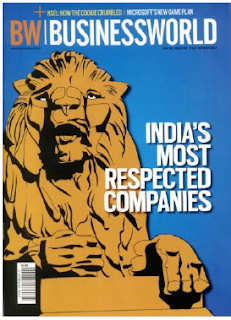 List of Top 10 India’s Most Respected Companies in a survey conducted by Businessworld. The survey covered a large number of top management executives and examined company performance across a number of important criteria.

Top 10 Most Respected Companies in India 2013-2014 List prepared by BusinessWorld based on the following factors.

The survey adopted a two-stage process. In the first phase, a total of 770 senior executives were asked to rate shortlisted companies in 15 different sectors. In the second phase, the top 3-4 companies in the sector lists were rated by another set of 514 respondents for ranking 10 top companies out of 52 shortlisted companies.
The findings of the survey feature as the cover story of the September 9, 2013 edition of Businessworld. The survey has been a bi-annual feature of the magazine since 1983.

You can also read: